THE ESTABLISHING SHOT HAS MOVED! THE NEW URL IS WWW.THEESTABLISHINGSHOT.ORG

Hi, friends and followers. The popularity of The Establishing Shot has led to it becoming its own website. You can now read all of my movie reviews and essays about the entertainment industry here:


I will no longer be posting new content at this Blogspot location. However, you can still find all of my older posts here from years past. The newer version of The Establishing Shot at the new URL will have catalogued content going back three full years, but not everything beyond that.

A big thanks goes out to designer Matt Kubinski, a friend and fellow critic at the Chicago Indie Critics with me, for his great work on designing and creating the new site for me. I'm thrilled about his work and I hope all of you will be as well.

Because of all of you, my loyal friends and followers, The Establishing Shot is now read in 27 countries. It earned its own URL, and I hope you continue to follow me at the new location. Be sure to bookmark www.theestablishingshot.org today! 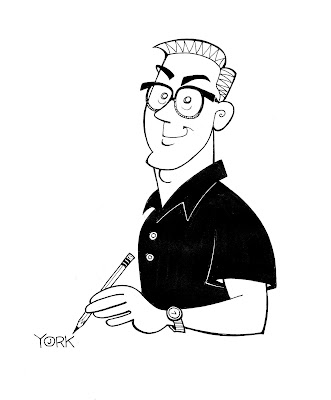 Thanks so much,
Jeff York

BACK TO THE FUTURE OVER AND OVER AGAIN WITH “TERMINATOR: DARK FATE” 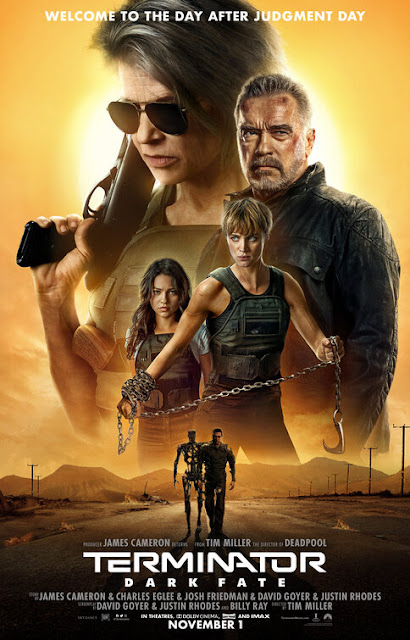 In 1984, filmmaker James Cameron gave the world THE TERMINATOR and it became a cult classic. Time magazine picked it as one of the top ten films of the year and its star Arnold Schwarzenegger became a household name. The film was a dark and gritty sci-fi thriller with a shooting budget of only $6.4 million, but because of the rave reviews and a strong $78.3 million dollar box office, it became a franchise.

Now, here we are in 2019, and TERMINATOR: DARK FATE, the sixth in the series, opens this weekend. This is the first one that Cameron has been directly involved with since TERMINATOR 2: JUDGEMENT DAY in 1991. (He's a co-writer and executive producer this time out.) Coming back too are Schwarzenegger and Linda Hamilton, the heroine from the first two films. It’s great that they’re all together again even if this latest take isn’t quite as wonderful as one would hope.

This new chapter veers back and forth between the old and the new almost like it’s one of the escape vehicles careening about during the many chase scenes. It recreates so many of the tropes of the franchise that have now become fodder for satire that at times this film feels more like a parody than an adventure. Simultaneously, this new movie also introduces too many new characters and by the time Arnie shows up well into the second hour, the screen is dotted with a lot of characters all fighting for screen time. (At times, it feels more like an X-MEN film with too many hands on deck.)

TERMINATOR: DARK FATE starts with the dark fate of Sarah Connor (Linda Hamilton) after she saved the world twice in the first two movies. Here, she’s living peacefully in Mexico with her 11-year-old son John (a digitally recreated Edward Furlong). They seem happy on the beach until a new Terminator (Schwarzenegger) shows up and blasts the boy dead. It’s a confounding scene, challenging one’s memory of the other films, but apparently Cameron has ixnayed the other sequels and this one is supposed to take place shortly after T2 ended. What’s even more startling in the scene is the expert de-aging a la THE IRISHMAN of Arnie and Linda. (Take that, Robert De Niro and Al Pacino!)

After that big rug pull, a rather egregious course correction at that, the plot plops down in the modern-day. Here, the film starts hauling out all the familiar Terminator tropes, the same as virtually all the other movies. It starts with two naked visitors from the future time-traveling back to earth. They're charged with hunting down the leader who will grow up to defeat the machines. The first body that drops from the sky is a young woman named Grace (a game Mackenzie Davis). She looks like a tall, blonde, volleyball player, but she’s actually a lean, mean, fighting er, half-machine. The technology has gotten even better in the future, and now the rebels fighting against the AI’s can send back a female soldier who has been altered with circuitry to become a cybernetically-enhanced warrior. (Take that, Wonder Woman and Wolverine!)

The futuristic AI’s have gotten better too. They send back an advanced Terminator model called a Rev 9 (Gabriel Luna). He too is lean and mean, yet very quiet, letting his lethal actions do all the talking for him. The Rev 9 can also split in two, unleashing his powerful endoskeleton to fight alongside his shapeshifting liquid metal form. Soon, these interlopers are after Dani Ramos (Natalia Reyes), the latest American destined to lead the rebels and defeat the machines.

Before you can say, “Come with me if you want to live,” Grace scoops up Dani from the homicidal grips of the Rev 9 and they’re on the run. The film becomes one extended chase sequence with the soldiers slicing, dicing, and shooting anyone who gets in their way. Grace proves to be a formidable adversary, cutting Rev 9 down to size with chains and staffs like she’s an elite Jedi. (Take that, Darth Maul and Kylo Ren!)

Soon, Sarah Connor shows up to assist in the gore-filled babysitting, and the girl power trifecta continues to kick the butt of the mucho macho machine over and over again. Sarah handles all the exposition too, with the sinewy Hamilton growling her lines like she's a buff Gena Rowlands. The veteran actress is having a blast and she makes the most of every moment in her big comeback role.

The action is fine, but not quite as exciting as it should be. The set pieces borrow so many tropes and bits from previous set-pieces in the franchise that it feels old hat. Not only are the stars and Cameron back, but so are the same ways to split, melt, and slow down that killer robot. Been there, annihilated that.

Then, about 70 minutes into the 128 minute film, the three warrior women finally connect with Schwarzenegger’s aging robot. He's been holed up in the Texas woods for decades after he killed John Connor decades ago. His mission completed, he retired, grew a beard, not to mention a heck of a lot older. Now, the Terminator has a wife, a kid, and a career as a drapery installer. (A bit written into the script clearly for the many jokes it fosters.) Arnie does his dead pan schtick without missing a beat, and it’s hilarious, but it feels musty too. Seems that the only thing that hasn’t faded are the Terminator’s muscles and Teutonic accent. Both are as formidable as ever.

There’s some amusing, barbed bitchiness between Grace and Sarah, and both give the Terminator a lot of side-eye. Here is where you feel the influence of Tim Miller, the director of DEADPOOL, adding similar snarkiness to this franchise too. Still, as fun as all that is, you can count the tried and true tropes being ticked by the scripters.

Cameron, Billy Ray, Charles Eglee, Josh Friedman, David Goyer, and Justin Rhodes rest on a lot of laurels. They bring back numerous iterations of the  “I’ll be back” line; there's a reveal of the genuine savior of mankind that is painfully obvious way too early; characters who die miraculously return; and of course, the film ends with a big, noisy showdown in an industrial complex just like so many times before. This film isn’t just the sixth Terminator movie, it’s practically all of them rolled into one. (Take that, GROUNDHOG DAY!)

Even more troubling, this is yet another franchise that set out to eradicate the majority of films in its franchise. STAR TREK and X-MEN did the same, and there’s something wholly disrespectful about tossing away films as if their existence didn't matter. Perhaps it’s the cleanest way to reboot, but it feels wrong. If such a fresh slate leads to more sequels in this franchise, let's at least hope that Cameron and crew find new ways to mine their man vs. machine storyline. They could start by figuring out a way to manage time travel better. Sure, the AI’s keep getting more powerful, but only one can be sent back at a time? Hmm, some future.
Posted by Jeff York at 8:11 AM No comments: