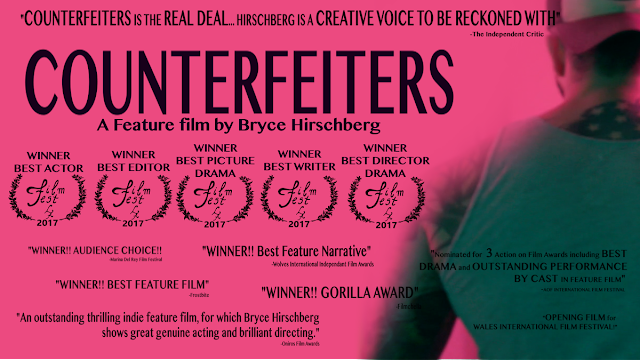 One of the best parts of my five years as a film critic at the Examiner online, before it folded, was discovering indie gems released under the radar. There were many small horror films that, despite not having huge budgets or a big studio’s distribution, scared the hell out of me, and impressed the hell out of me too. Such discoveries still excite me today, horror or other genres. VOD, iTunes, Netflix, Vimeo - these are some of the places you can find such films. More and more, they are chock full of exceptional entries that are giving Hollywood studios a run for their money. They are movies made by very talented filmmakers with few dollars, but plenty of gumption.

Bryce Hirschberg is one such artist, and his first feature film COUNTERFEITERS is one auspicious debut. Shot for next to nothing, Hirschberg is the writer/star/director of this indie feature and he clearly demonstrates what a triple threat he is. (Watch out, Woody Allen and Warren Beatty!) He also must be quite the bookkeeper too because the film doesn’t look like one that cost a mere $8000. It looks sharp, polished and professional at all production levels.

The story centers around Bridger (Hirschberg), a counterfeiter who thinks he can bridge the gulf between his normal life and a career in crime. He’s almost a cockeyed optimist about it. He takes an easygoing, casual approach to his less than admirable career choice and it's charming in its way, as well as unnerving. Shrewdly, Hirschberg has his cinematographer David Klassen shoot this thriller with almost the same breeziness that Bridger has. We're sucked into a world that doesn't seem all that dangerous from its appearances, just like Bridger, but we should all know better. After all, in any crime drama, the piper will have to be paid.

Bridger has chosen this profession of funny money to help pay for his mother’s medical bills once her cancer returns. His normal job will not cover her extensive treatment, and he needs to raise a lot of cash quickly. Thus, he decides to not only make phony bills to pay for her care, but soon the temptation to use the counterfeit dough for more will start bogging down his mind and his morality. He will discover that being such a good criminal rather excites him. He likes living on the edge, especially when he feels as if he's got it all under control.

Such hubris gives him his confidence, his strut. At one point in the film, Hirschberg spends the good amount of a minute just showcasing Bridger walking on his way to his yacht where he makes his product. As he casually and cooly saunters, sometimes on the phone, sometimes just admiring his world,  Bridger appears as if he's a collegiate BMOC. He's almost ridiculously masculine, assured, even jaunty. His face is wide-eyed and open, smiling at his success. This is a man who would never act like a skulking criminal hiding his face from the world.

But his confidence is actually an unfortunate sort of naiveté. Sure, Bridger is great at counterfeiting, and he’s incredibly shrewd to insist on keeping the denominations only in 5’s, 10’s and 20’s as to not draw undue attention to their product, but he brings in his college buddies Rob (Robert McEveety), Preston (Taylor Lockwood) and Jimmy (Shawn Rolph) to help his charade and they are simply not the dependable sort. They’re ambitious, as Shakespeare described Cassius in JULIUS CAESAR, and we all know how that turned out, don’t we? “Who checks a $10?” Bridger tries to reason with his cronies at one point, arguing on why a lower product profile is best, but his guys don't see eye-to-eye with him. They want to make bigger bills and bigger profits. And of course, that will mean bigger risks for everyone involved.

But risk is all around Bridger, and he should see it, yet because he manages his way around it with great aplomb, he tends to not regard it as much of a threat. When he does a favor for a drug lord by dropping off some coke, he is tempted sexually by the zonked-out model at the customer’s address, but he escapes just before succumbing to her charms and her hair-trigger temper. At a local bar, Bridger unwittingly hands an obviously counterfeit $100 to a waitress, but manages to bluff his way out of hot water by distracting her with an invite to a party. No wonder Bridger has a 'cock of the walk' gait, he's got quite a guardian angel on his shoulder.

But soon enough,  his reckless, greedy friends will not only put the business at great risk, but everything else will build to a head as well. There are problems with his mother's bills so the hospital is threatening to throw her out on the street. His girlfriend discovers what he's up to on that yacht and she's furious. Even worse, a cop and a hidden gun will soon appear and all hell will break loose. Hirschberg tightens the screws here, creating delicious tension as Bridger must finally face all of it and the inherent dangers that come with his craft.

To tell more about where the plot goes would destroy too many of the joys to be found in the viewing of this taut 75-minute film. Suffice it to say, blood will be spilled, lives will be taken, and Bridger will have to contend with his sins. Some of the narrative is inevitable, as it must be in the genre, but so much of this film's fun lies in how Hirschberg gets us there. He mines a lot of laughs out of his dangerous characters and surroundings, and also manages to bend the cliches of the genre with mischievous relish. For example, these types of stories always have a lot of bloodletting, but few show how difficult it is to wash blood off one's face and the upholstery. The clean-ups scenes are both scary and knee-slappingly funny.

And through it all, Hirschberg holds our complete attention as a leading man too. He’s incredibly assured in front of the camera as he is behind it, and neither his performance or his helming of the film seems to have slipped in any way due to pulling double duty. Most of Hirschberg’s cast are friends of his, and while they aren’t as talented as he is, they lend their out-of-their-depth characters an appropriate guilelessness whether intended or not. Wisely, Hirschberg directs most of them to underplay even the bigger scenes, letting the violent acts speak the loudest.

COUNTERFEITERS has been making the festival route throughout the world, from Marina del Rey to Lithuania to Wales, and it’s won a batch of awards along the way. At Filmchella, in the USA, Hirshberg’s film was awarded the "Gorilla Award" as "the most innovative filmmaking; independent in spirit, often times against all odds with no budget" As more and more Hollywood studios have all but eliminated funding modest films, choosing instead to put all of their money behind multimillion dollar CGI tentpoles, it’s nice to come across a talented and tenacious filmmaker like Hirschberg who's created a film where the greatest effects are its story and characters. COUNTERFEITERS may have been bereft of a decent budget, but its many rewards are hardly phony.
Posted by Jeff York at 10:13 PM