The movie BLACK MASS received strong reviews (75% at RottenTomatoes.com) and good box office its opening weekend (23.4 million). And its star Johnny Depp garnered some of the best reviews of his career. Oscar pundit Sasha Stone has already pegged him as the frontrunner for Best Actor, and indeed, his performance as Boston gangster James “Whitey” Bulger is exceptional. In fact, it’s one of the most terrifying villains to come down the pike in some time, perhaps the scariest since Javier Bardem’s Anton Chigurh in 2007’s NO COUNTRY FOR OLD MEN. How did Depp create such a stunning sociopath? There are five key elements to his extraordinary accomplishment.

Portraying a real S.O.B. from history can be a blessing or a curse. Capturing a bonafide baddie we’re familiar with can be tricky. Forest Whitaker brought the despot Idi Amin to vivid, sweaty life in THE LAST KING OF SCOTLAND but Leonardo Di Caprio never quite captured the ‘chip on the shoulder’ bullying of runty J. Edgar Hoover in Clint Eastwood’s bio pic. Here, Depp understands the essence of the power of a hoodlum like Bulger. It’s a take-no-prisoner viciousness as well as a serpentine charm. You don’t get to be powerful in crime, and have the kind of loyalty that Bulger instilled in his people, without a balance of likability and intimidation.

Thus, in every scene, Depp’s Bulger wields his hold over people through either trope, or both, often turning on a dime depending on the situation. When he questions a young prostitute about her interview with the Boston police, he’s gentle and soothing. Bulger wants to make her comfortable so her guard drops and she’s more honest. And when she blithely admits that she talked about him a lot, Bulger keeps his cool even though we know she’s doomed for her insolence. This is the Bulger that everyone knew and Depp nails those traits brilliantly.

IT'S A GREAT SCRIPT

Doing a riveting crime drama on the big screen is difficult when the small one does them so well. It’s especially difficult if you’re telling a true story, and one with a 10-year trajectory like BLACK MASS. But screenwriters Mark Mallouk and Jez Butterworth expertly condensed the essence of Bulger’s reign of terror, and they make a dozen complex and dangerous characters understandable, and even pitiable. And director Scott Cooper corralled a large cast brilliantly, letting each of them shine, and serve the purpose of the bigger picture. (Arguably, Joel Edgerton’s FBI dupe is the real villain here for making the deal with the devil that allowed Bulger to break the law unchecked for years.)

Depp must have been reminded of what he read when he first was handed DONNIE BRASCO. In this script, he too must have recognized a fascinating story about the mob being told clearly and dramatically. It’s a script that once again gave him the refreshing opportunity to explore a complicated character and ground him in a real world versus so many of the fantastical scripts Depp has chosen of late. As good as Depp is at the roles like EDWARD SCISSORHANDS, he’s even better when he makes the real just as compelling.

DEPP PLAYS UP THE SEXY

Bulger may have had bad teeth and a receding hairline, but he wasn’t unattractive. In fact, he was fit, handsome and had a certain physical charisma. Depp wears makeup to suggest Bulger’s flawed looks, but he doesn’t squelch all of his handsomeness. He wears tight clothes that show off a fit body, and there’s a certain James Dean quality to the way he wears T-shirts and jackets with his long-legged jeans. And while he does a strong Boston accent, Depp uses his smooth, whispery tones to insinuate himself and gain trust and loyalty from those in his circle. A villain always sees himself as a hero, and Depp plays Bulger like he truly believes he’s one sexy devil.

HIS ACTIONS SPEAK LOUDER THAN WORDS

Depp is always great at burying himself in his roles, devising unique looks that mask his own, and creating strange voices to support his eccentric creations. Here, Depp loses himself in the role as well, but ultimately, not that much. He’s still recognizable physically and his voice isn’t something out of left field like it was in CHARLIE AND THE CHOCOLATE FACTORY. Yet, for all these recognizable Depp tropes, it’s his physical prowess that dominates the performance. In every scene he has in the film, it seems that he is physically threatening or about to be.

His Bulger comes off like a coiled rattlesnake, ready to strike at any moment, yet elegantly holding himself back until driven to the appropriate rage. The Boston crime boss liked to get his hands dirty too and when Depp’s Bulger rage explodes, there is such an overwhelming brutality to it, that it hardly seems like anything we’ve come to expect from the character actor. For a man who’s often played effete, the shocking machismo in this picture is terrifying. When he strangles a victim or empties a shotgun into a stoolie, Depp’s a Mack truck.

Just as frightening is how he assaults in the gentler ways. When he caresses Julianne Nicholson’s cheek trying to win her over but knowing she’s repulsed by him, his touch turns just a little firmer. It’s sexually domination in its way, another weapon in Bulger’s arsenal. He controls every relationship in this film and Depp dominates every scene. Even when he’s staring through his blue contacts at his next prey, you can’t help but think of an unblinking panther readying to strike.

HE MAKES BULGER FUNNY AS HELL

The veteran actor has always been superb at cultivating laughs in films like ED WOOD and ALICE IN WONDERLAND, but here he uses his hilarity to mine terror. Depp makes sure that each droll line and bemused look from his mobster registers as a cocky man enjoying his savage wit and minions jumping through his hoops. Bulger was a smart cookie and a sharp leader laughing at the world and how he had everyone from the town’s political leaders to the FBI wrapped around his pinky finger.

Johnny Depp will very likely figure in the end of the year critics’ balloting for Best Actor. And Stone’s prediction that he’ll net his fourth Oscar nomination seems almost certain. (The film should rack up nods and awards too.) Depp’s portrayal of Bulger may very likely go down in history as one of cinema’s greatest thugs, a villain for the ages. It’s an extraordinary accomplishment from an actor who so often is just that.
Posted by Jeff York at 1:39 PM No comments:

THIS SEASON'S MOVIE POSTERS ARE SIGNS OF GOOD THINGS TO COME

The fall movie season is upon us and the posters for many of them are harbingers of good things to come. So often these days, movie posters tend to be Photoshopped hodgepodges crammed with too many stars, too much airbrushing, and too little of a concept. There’s an old adage in advertising that instructs marketers to “say one thing, and say it well.” A movie poster is an ad after all, and the more single-minded the better. Here are seven this season that caught my eye and certainly deliver on such criteria. 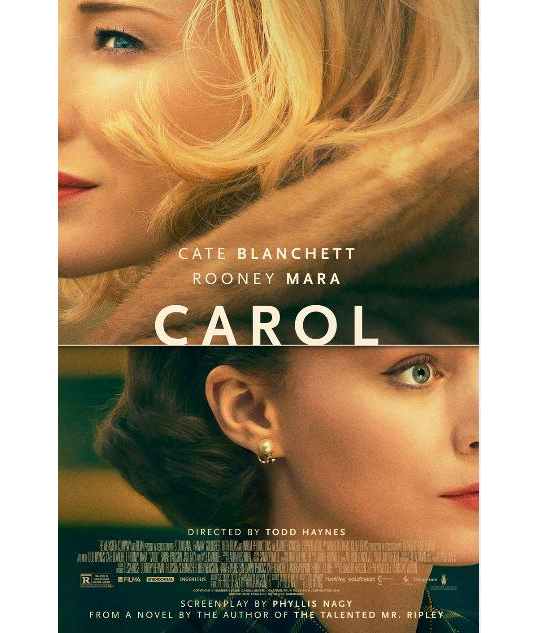 My favorite poster this autumn is for CAROL, the new Todd Haynes movie that made such a splash at Cannes this past spring. Cate Blanchett plays the title character, a well-to-do wife in the 1950’s, who starts an affair with a younger department store clerk (Cannes Best Actress winner Rooney Mara). Such an affair during that time period, under such conditions, would be fraught with strife. The poster promises just that. The unusually cropped photos of the two leads, facing away from each other, yet of the same lighting, creates a tension and romanticism that already aches. The audience is sure to as well during what looks to be a heartbreaking story. 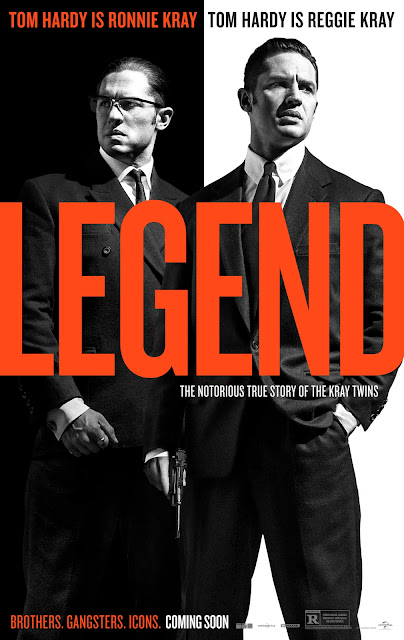 How does this poster justify its title written in such large, red letters? Let me count the ways. First, the story of the 60’s Kray twins is one amazing true crime tale. Second, Tom Hardy plays both roles, and his two very different performances in the film are already gathering strong Oscar buzz. And three, the film will seamlessly put two Tom Hardy's into scene after scene. From the previews, such special effects already appear legendary. 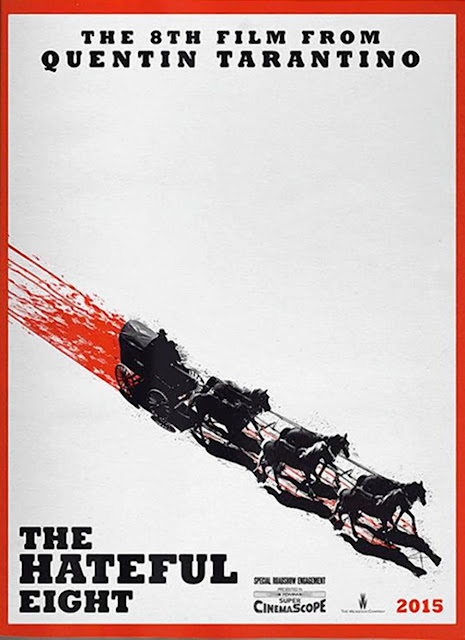 It’s only the teaser poster, but Quentin Tarantino’s latest promises to have a throwback classic western vibe to it, and the art brilliantly captures that feel. And the wonderfully morbid image of the stagecoach leaving a trail of blood in its wake promises all the sorts of nasty fun we'd expect from the singular filmmaker. The movie may be studded with stars like Samuel L. Jackson and Kurt Russell, but those responsible for the poster know that the biggest star at play here is the writer/director himself. 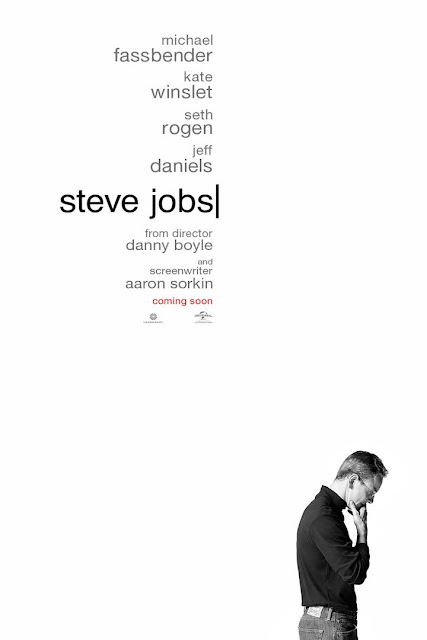 From the accounts of those who who knew him, Apple founder Jobs was a forward-thinking genius, a man driven by wild ambition, and a guy, who more often than not, was a world class a-hole. Could this poster capture all of that any better? Jobs (Michael Fassbender) stands close to the edge, lost in thought, and yet so utterly alone. The wonderfully sparse poster even plays off the clean white vibe of the Apple brand and all its marketing. 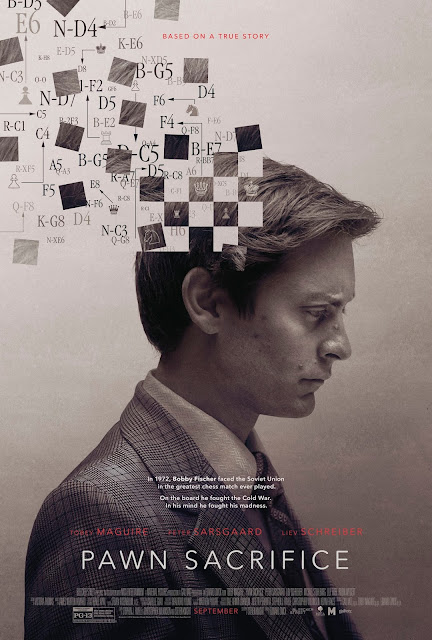 Here’s another genius loner, this one with so many thoughts and demons, they're tumbling out of him. 1970’s chess champ Bobby Fischer (Tobey Maquire) was a brilliant competitor, but one whose greatest battles were with those demons inside his head. This poster brilliantly captures all of that in a single, yet complex image. There's a horror movie feeling to it all too with its dark shadows and desaturation of color. Indeed, Fischer’s story is a rather scary saga about one's mind becoming a beast of burden. His story on film promises to be tense and challenging, just like this disturbing poster. 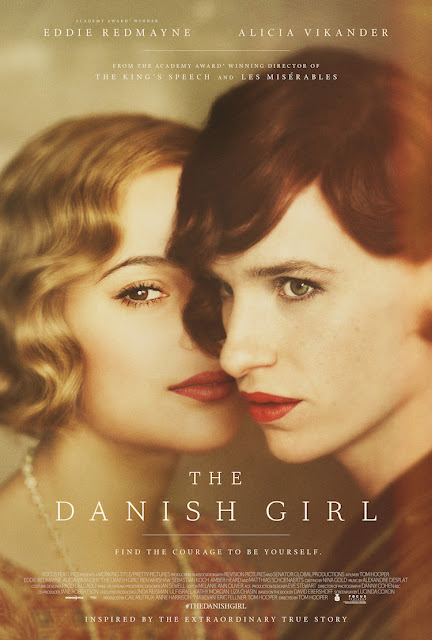 Most movie posters sell the stars. But this one proves you can use the trope of big faces but do so with a POV that trumps most of the bland and basic Photoshopped one-sheets. In this movie, Eddie Redmayne plays Lili Elbe, one of the first recipients of gender reassignment surgery. The story took place back in the 1920's, but it couldn't be more timely with our LGBT-aware world today. Thus, the poster suggests the flapper period, but it's cropped in a way to appear modern too. Interestingly, the image also obscures a great deal of costar Alicia Vikander's gorgeous face. A metaphor for how Lili's personal needs taking precedent over those of their marriage? You bet. 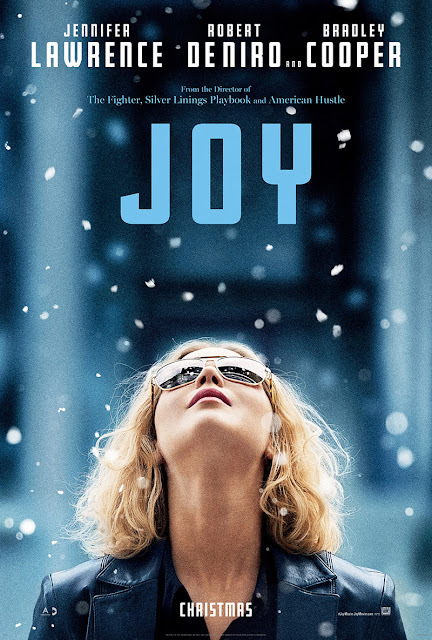 Bold and daring is the studio that puts the biggest star in the planet on the poster, then all but disguises her face. That is what Fox 2000 has done by hiding Jennifer Lawrence behind sunglasses and showcasing her looking up at the sky so we're looking up her nostrils. Granted, her name is unavoidable at the top, but this poster tells you that her latest starring vehicle is different. The image suggests melancholy, which is a wonderful contradiction for a movie called JOY. Granted, that's the name of her character in the film, but still, the poster hardly conveys something ebullient.

The buzz on all of these movies is incredibly strong and it would appear that the remainder of the 2015 film year will be very special. These posters reinforce such hopes. And they prove that the best movie ads carry on the idea of saying something singular and saying it very well.
Posted by Jeff York at 2:34 PM No comments: